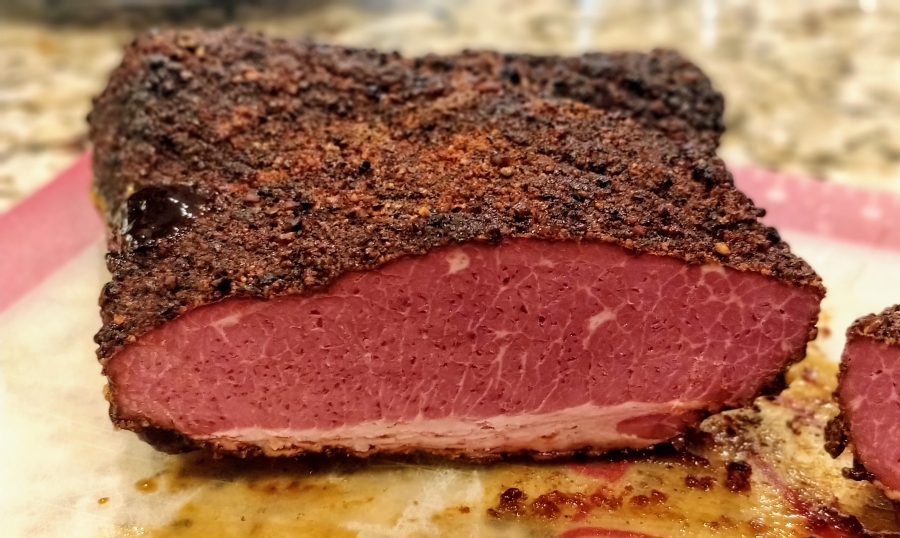 I have been wanting to do a pastrami brisket for a good long while now. However, it is a time-consuming process. So when I was at Costco recently and saw a corned beef brisket already brined and ready to go, I grabbed it. It was a pre-brined USDA Choice brisket flat weighing a healthy 5.81 pounds. Shortening the timeline by having the brisket already brined was something I was definitely in favor of. I did still do some basic prep work. There was not much in the way of trimming that was needed, thankfully. So first I soaked the brisket for about 8 hours to remove some of the saltiness that comes from the brine. Then it sat in the fridge uncovered overnight to allow it to form a pellicle. The next morning first thing I rubbed it with a pastrami dry rub (I chose not to use any sort of binder – mustard, vegetable oil, etc. Instead, I just put the rub straight on the brisket). Once rubbed, it sat for an hour or so before it went on the pit. I used hickory pellets on my Traeger Texas Elite 34 pellet grill at 250°F. And I added my pellet tube for the first 4 hours or so to give it some extra smoke. It hit the stall about 6 hours and 30 minutes in. That’s when I wrapped it in butcher paper. About 4 hours later it had reached the target temperature of 203-205°F. So I pulled it and rested it in my Yeti Tundra 35 until it had cooled down. The final cooked weight was 2.6 pounds.

It went in the fridge overnight, and the next day we had some good friends over to enjoy it together (don’t worry, this was before the “stay at home” orders went into affect all over the country). To warm it back up, it went into the oven (still wrapped in butcher paper) at 250°F for about 90 minutes. Then I sliced it with my 11″ Granton edge slicer (I got mine for a very good deal on Amazon). For pastrami I would prefer thinner slices. But since I don’t have a commercial meat slicer, I did the best I could. Maybe I can get better at slicing more thinly with practice – or maybe I just get a commercial slicer. Either way I was very anxious to enjoy that beautiful dark red pastrami. Everybody got to make their own sandwiches. I think the results were pretty darn tasty. We had everything to make a Reuben sandwich or just a straight-up pastrami sandwich — thousand island dressing (I know it’s not the same as Russian dressing – but close enough for me), a great quality sauerkraut from Costco, Swiss cheese slices, and a tasty rye bread from HEB (so happy to live in Texas!), as well as a coarse-grained brown mustard if someone didn’t want the thousand island dressing. For minimal effort it was a great outcome. The only thing I think I’ll do differently next is smoke two briskets rather than one so I can enjoy a few more of these delectable sandwiches.