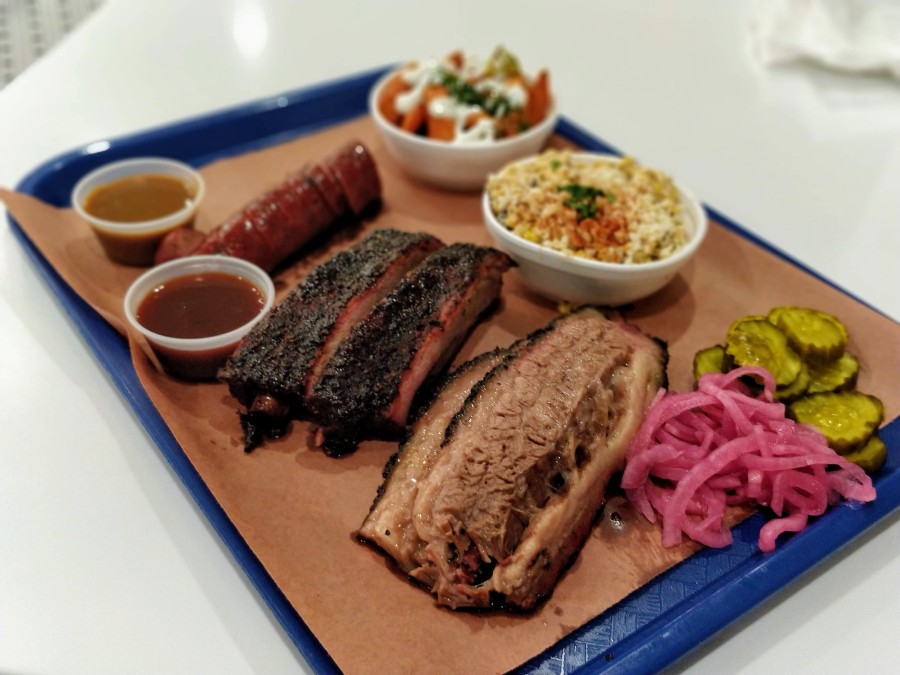 I recently experienced absolutely stunningly-delicious craft barbecue in one of the most unlikely places you might think of – at a corporate building food court in Greenway Plaza near downtown Houston. Yes, you read that right – a food court. Feges BBQ (it’s pronounced almost like you would say the plural of the word Fiji — “fee – jis”) is that place – and man is it awesome!! They have been open for right around two years now. It was started by Patrick Feges and his wife, Erin Smith. Erin is classically-trained chef, who has held key posts at some pretty amazing restaurants in NYC and Houston. She has also been the winning chef on Chopped, the popular show on the Food Network. Patrick has been smoking meat professionally since 2012, and has received training at some pretty amazing Houston-area barbecue spots before they opened their Greenway Plaza restaurant. When I say their barbecue is amazing, I am not alone. Just last year Feges BBQ was named one of Texas Monthly Magazine’s Top 25 New Barbecue Joints in Texas. They have just incredible smoked meat. There are too many choices honestly. I wanted to try the whole hog (yes, as in what they do in the Carolinas and Tennessee), pork belly, pulled pork, turkey and their boudin. But I knew that I had limited space in my stomach. And since this was my first visit, I went with the Texas Trinity of brisket, pork ribs and sausage.

What I wasn’t prepared for was both the variety and deliciousness of their sides. There were too many to choose from. I ultimately decided on Erin’s Moroccan spiced carrots and the elote corn salad. Both were fantastic. Given that they are in a commercial building food court, they also offer other choices – like kale salad or BBQ chef salad for lunch. The housemade pickles and pickled red onions and their two different kinds of barbecue sauce were very nice complements to the amazing meat.

I wish I would have had room for dessert. I’ve heard great things about them as well – especially the banana+caramel cream pie. The truth is, I am going to have go back again (and again) to try the food that I didn’t get to try this time around. If only Greenway Plaza were a shorter drive… Oh well.