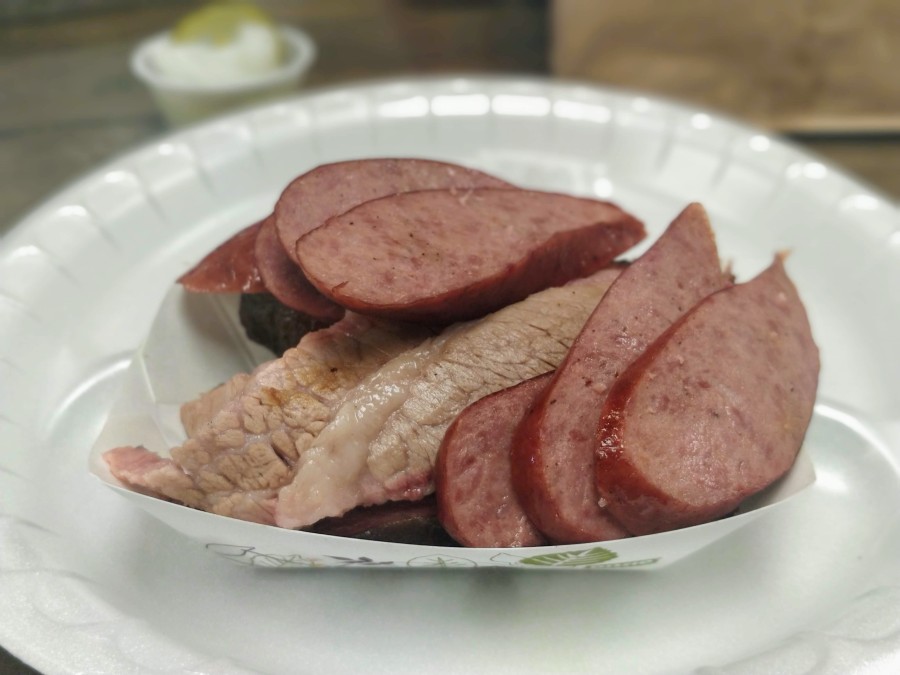 Cole’s BBQ, located in Fairfield, may not be a really well-known barbecue joint. Maybe it is because it is located in a very small town on the I-45 route between Houston and Dallas. Maybe it is because it is housed inside a Shell gas station on the east side of the road. Whatever the reason, it makes no difference to the quality of the smoked meats being produced day in and day out. I made a stop recently on a trip up to Dallas from Houston, and got there a few minutes before the restaurant counter opened at 10am. So I hung out for a few minutes wandering the store. That was great because I got a chance to talk with Kamry. She’s the pitmaster there. She was very friendly and kind, sharing some great information about their brand of barbecue. They use a couple Ole Hickory cabinet pits, and burn only mesquite. They put their briskets on the pit around 3pm each day, and then pull them around 9am the next morning. There is no wrapping for any of their meats. For their rubs they use only salt and pepper on the brisket. And for the other meats, to the salt-and-pepper base they add cayenne, garlic and a few other typical rub ingredients.

Since it was morning, and I had a few other barbecue stops, I did not order a full meal. But I wanted to try both the brisket and the sausage. The brisket had a very nice flavor. The bark was a nice dark amber color. And there was a beautiful smoke ring. They offer three different sausages – a Polish sausage, a hot link and a jalapeño link. Since I’m a big jalapeño fan, I chose that one. The flavor was very good, and the casing had a good snap. But the grind was not my favorite. Even so, I’ll order it again next time I stop there. Cole’s offers three different barbecue sauces. They have their original sauce, which is a little sweet but very serviceable. The Lady Bird sauce has a bit of a hot sauce kick. And the Barbara Bush sauce is mustard-based. All three were nice companions to the already-tasty meat.

While Kamry and I visited, she shared a couple things that were new to me – one about pork butts and the other about turkey breast. First, they brine each pork butt overnight before it goes on the pit. I’ve not heard of that before. She let me taste a sample of their turkey breast. Man was it good. I asked if she brined the turkey breast too and she said no, that the secret to their turkey is that they slather mayonnaise all over it and then sprinkle it with black pepper. I tell you what – next time I smoke a turkey breast, I am definitely going to try that, because that turkey was moist and absolutely delicious with a very nice mesquite-smoked flavor.