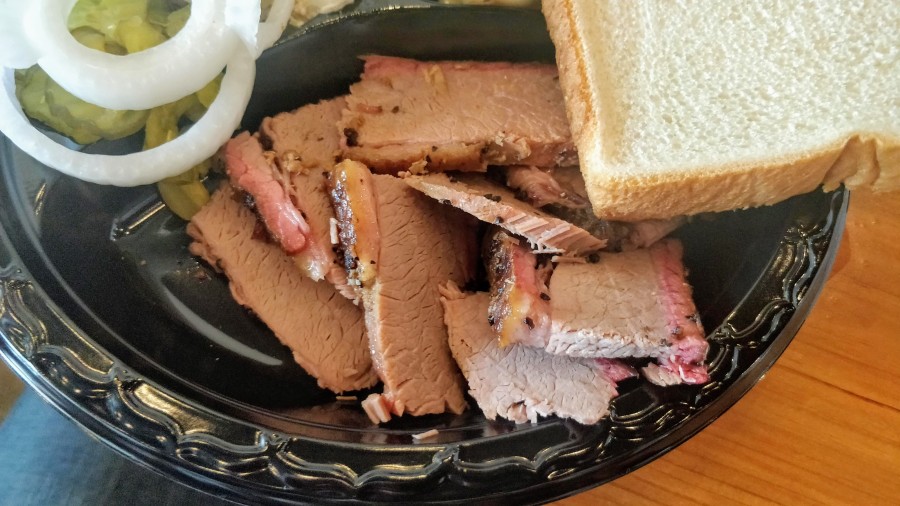 Today (Monday, July 29, 2019) is the official grand opening for 2 Guys 1 Pit BBQ. I got a sneak peek last Wednesday and of course had to go back over today to be a part of the grand opening. I got a quick kitchen & pit room tour this time and got to visit again with Richard. And there are two things I need to correct from last week:
1. The cabinet smoker they are using in the restaurant is not from Ole Hickory Pits – it is a 48″ wide front-opening propane-powered rotisserie pit from American Grill Company out of Sikeston, Missouri (about half way between St. Louis and Memphis).
2. Richard does not use USDA Prime grade briskets. His preference is for Choice grade, giving him a little leaner meat. FWIW, they source their beef from Halperns’ Steak & Seafood, according to the sign on the door.

Once again I was very pleased with the deep smoke ring and the great flavor of the brisket. Surprising to some is the fact that there is actually not a direct correlation between the smoke ring and the amount of smoke flavor in the meat. I’ll have to write more about that at some point soon. I’m dying to try their pork ribs – but sadly they’re not ready for prime time yet. So I’ll have to be patient for a few weeks until they’ve got their recipe tweaked just right and ready for their lunchtime crowd.

I had to get the baked potato salad, which once again was exceptional. Ashley also recommended that I try their mac-n-cheese. And let’s just say that now the baked potato salad has a strong competitor for my favorite side. The white cheddar sauce was awesome – perfectly creamy and just salty enough for taste.

These 2 Guys and their 1 Pit are the real deal. They’re gonna be open Monday through Friday for lunch. So go see ’em. And tell ’em that the Smoked Food Addict sent ya…