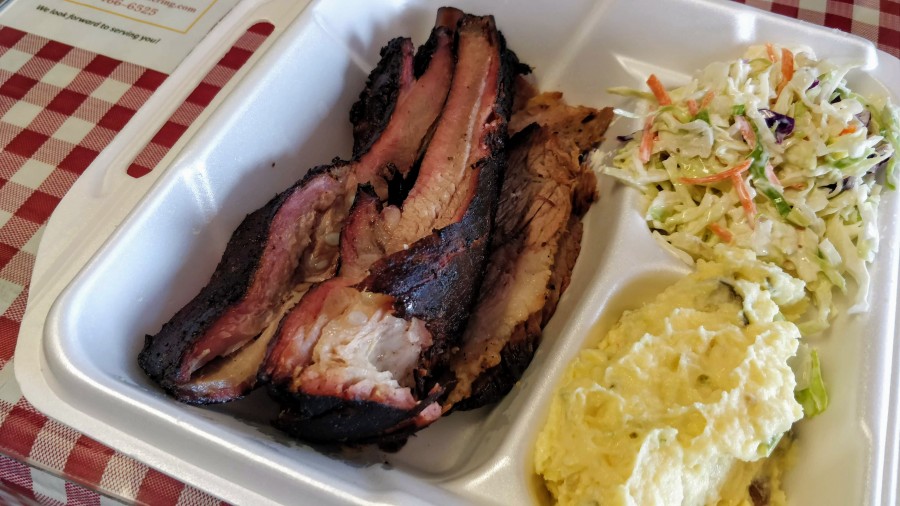 I finally got some time to go back to Virgie’s Bar-B-Que. And happily this time they were open. Virgie’s is a classic barbecue joint in the Carverdale area of northwest Houston located on the west side of Gessner just south of the Hempstead Highway. And I gotta say, Virgie’s delivers some great barbecue. The building started out in the 1960’s as a burger joint and then a grocery store. Named for the owner and pitmaster’s (Adrian Handsborough) mother – Virgie, Adrian and his crew use pecan and oak for their smoke. This is very much an East Texas barbecue joint , where the focus is on the pork ribs, rather than brisket, which is what so many central Texas-style barbecue joints do. I ordered the two-meat plate, which was very reasonably priced for the amount of food they include. I of course went with the pork ribs as well as the brisket.

Pork spareribs – Virgie’s offers both full spareribs as well as baby backs. I opted for the spares – I love the flap and extra meat around the cartilage on spares. And I tell you what – those were some fantastic ribs. They were not served wet or sticky. They were dry and delicious, with no sign of a sticky sweet mop sauce or sugary barbecue sauce finish. It was just the smoky delicious meat, the salt-n-peppery rub and that pecan and oak smoke. The flavor, texture and chew were just amazing.

Brisket – the brisket was not bad. But it was clear that it was not the star of this show. The flavor was not bad – it had a good smoky taste, and the bark was fine. The fat was rendered pretty well. It just was not spectacular like the ribs.

Sausage – My barbecue buddy, Craig, let me try his sausage. It was an all-beef link. It had a good taste and grind. I like my sausage to be a bit spicier – with some kick. But this was a good, solid sausage.

Sides – The potato salad was outstanding – just the way I like it. It was almost like an amazingly-delicious mashed potato salad. The mayo-based coleslaw was very good as well. Virgie’s in-house barbecue sauce is sweet and sticky sauce – as I have come to expect from East Texas barbecue. And though the ribs needed absolutely no sauce (they were impeccable straight up), it was very good complement to the meat. And of course I always love pickles, raw white onions and a couple slices of white bread to make a little sandwich out of or mop everything up.

Over the past couple years I have become a big fan of East Texas barbecue. And Virgie’s is an outstanding outlet for this great style of smoked meats. I’ll be back there again without question.