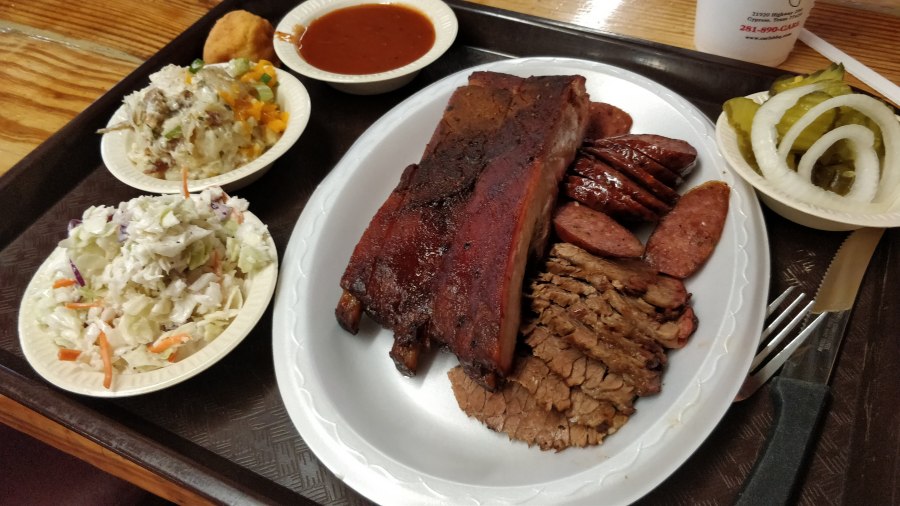 I have to be honest. I did not originally intend to visit Carl’s Bar-B-Q on my most recent BBQ run. I had intended to give Virgie’s Bar-B-Que a try. But they were unexpectedly closed for the week (even pitmasters need a break every once in awhile). So the next closest joint on my list was Carl’s. And I have to say – I was impressed. Situated on the east side of US 290 right next to Weiser Air Park in Cypress, Carl’s BBQ doesn’t look too fancy – which is typically a good sign for barbecue joints. But they really do turn out some good barbecue, sides and desserts. They use four gas cabinet pits and burn only mesquite wood. I wasn’t able to get a tour of the pit room, and the gentleman working as cutter was not certain of the smoker brand – but my guess based on the description given is that they use Southern Pride pits. They offer a wide variety of smoked meats, including brisket, two kinds of sausage, pulled pork, ham, pork ribs, chicken and turkey. Their pricing was very reasonable – so I opted for a three-meat plate. And of course I had to choose the Texas trinity of brisket, sausage and ribs.

Brisket – The brisket had a decent smoke ring and well-rendered fat. It was not incredibly smokey. But it still had a good flavor.

Ribs – The pork ribs were definitely a winner. Those were some outstanding ribs. Carl’s clearly sources an excellent and large pork spare rib. Then they use a good rub and smoke each rack very nicely. The fat was well-rendered, and they were very moist and flavorful. With each bite, the meat pulled away from the bone nicely with a tug, but didn’t just fall off the bone.

Sausage – They offer two different kinds of sausage at Carl’s. I tried the jalapeno link. It had a very nice great grind and was very tasty. For anyone concerned about too much kick in a jalapeno link, no need for worries here, as it is not overly spicy at all.

Sides – I am generally very focused (justifiably, I believe) on the smoked meats when I go to a barbecue joint. However, one of the sides at Carl’s had me intrigued. And there was good justification, as their Baked Potato Casserole stole the show. It was really very tasty, with a great combination of ingredients. It is just a very well put-together side dish. The coleslaw, on the other hand, was pretty average. It was certainly passable and very edible, but nothing to write home about. I tried a bite of my barbecue buddy Craig’s Green Bean Casserole. It was also very good with plenty of french-fried onions on top and good flavor.

Sadly, I totally spaced taking a picture of their most excellent Texas Sheet Cake. It is made in house and is a cross between a Texas sheet cake and a brownie. It had an outstanding dense consistency, with truly delicious frosting and a very nice chocolate-y flavor.