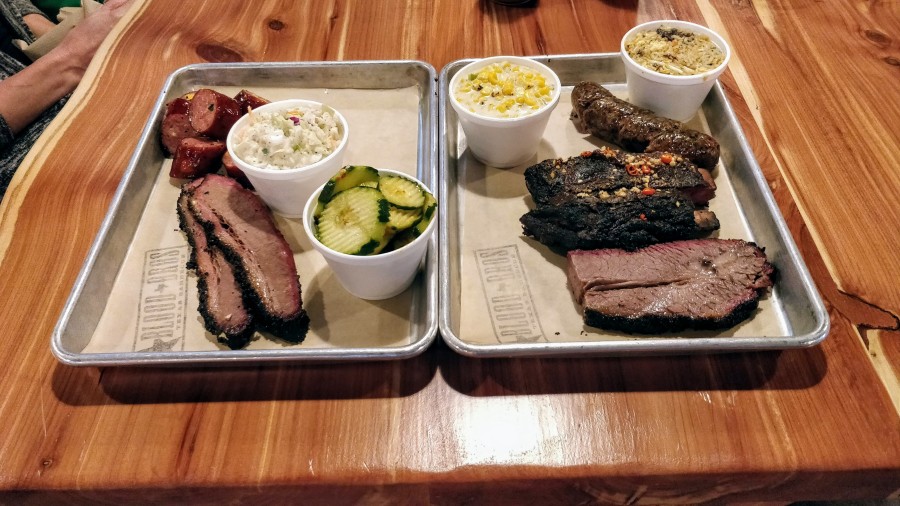 The I Crush Barbecue Show podcast (hosted by Abe Delgado, a Texas native transplanted to Southern California) held a contest right after new Texas Monthly Top 25 New BBQ Joints was released a couple weeks ago. I entered and won – so a big shout and and thanks to Abe, for holding the contest. My award was that I got to eat at any of the new joints on the list near my home – I had a choice between Reveille BBQ, up in Magnolia, and Blood Bros. BBQ, down in Bellaire. It would have been a very difficult choice – except that bad weather blew into to Houston and took Reveille offline the day I had planned to take my wife (fortunately I don’t live too far from Reveille, so I’m certain that I’ll get there again very soon anyway). So we headed down south of Houston’s Galleria area and enjoyed some amazing Asian-inspired barbecue. There is a reason that Blood Bros. BBQ was named to the Texas Monthly Top 25 New joints. Terry, Robin and Quy are just knocking it out of the park every day. We went on a Friday, which is a great day for specials at Blood Bros. Friday’s are known as “Thai Day Friday“, and they offer two different Thai spice smoked meats.

Thai peanut butter sticky ribs – These St. Louis-cut spare ribs were rubbed with, as you guessed it, peanut butter and Thai spices. The finished product was topped with crushed peanuts and chopped Thai chiles. Oh my goodness, the flavor was incredible.

Thai green curry boudin – This boudin is delicious and heavy with Asian spice flavor. For those that aren’t familiar with boudin, it is a Cajun loose-packed sausage filled with pork, liver, rice and a variety of different spices – in this case some Thai green curry spices.

Brisket – Not surprisingly, both the lean and fatty brisket were on point. They had great bark, well-rendered fat, and an excellent smoke ring. And of course the beefy, smoky flavor was fantastic.

BBQ sauce – Blood Bros. offers two kinds of barbecue sauce. One they call “S.W.A.T., or Sauce With a ‘Tude”, which is a reasonably typical Texas style sauce. The other is called “Houston 34”, and is mustard-based. Both of their sauces are excellent and complement the meat well.

Cucumber salad – Was very tasty, and that is saying something for someone who doesn’t even like cucumbers. It definitely had an Asian flavor profile, with Asian pickling spices. It was only lightly pickled, and packed a great flavor.

The creamed corn and jalapeño coleslaw were both outstanding once again. And I had to take a side of brisket fried rice home as well. That stuff is crazy good. There is good reason why Blood Bros. BBQ is on the Texas Monthly Top 25 New BBQ Joints list. These guys are just flat out delivering amazing barbecue.